“I’ve been pinching myself every day since last Christmas,” says Steve Bradbury, who gave up a career in corporate restructuring last year to concentrate on his true passion – painting – and to finish renovating his family’s new home in Dún Laoghaire, Co Dublin.

Bradbury, originally from Devon, started out as an engineer with the Royal Air Force and met his Irish wife, Anna, back in 2002 while posted in Sierra Leone, where Anna was working as a doctor for Goal. A few years later, Bradbury left the RAF, set up a business consultancy and he and Anna moved to Cambridge, where they had three children, Conor, Lucy and Jamie. Anna was working at a Cambridge hospital while Bradbury was drafted into help restructure companies as diverse as the NHS, London Zoo and Her Majesty’s Armed Forces.

In 2014, Anna was offered a job in a Dublin hospital and subsequently Bradbury was recruited for a contract in Blackrock Clinic and the move back to Ireland began. “We initially spotted the house on Cambridge Terrace online and felt it was a sign, given where we lived, but when we sent Anna’s sister to have a look on our behalf, she advised us to stay well clear of it as it was in such a state, so we left it at that. Months later, having found nothing else that we truly liked, we got a call out of the blue from the estate agent asking did we want to put in a final bid, as our names were still down on his list. Intrigued, we flew over to see the house the next day, loved it and put in a bid.” he says.

The bid was accepted but it took a full year to get everything over the line as the property was in probate and the leasehold belonged to the De Vesci estate. But the Bradburys used this time to figure out how to best approach the massive restoration project ahead of them. The four-storey Victorian home was split up into self-contained flats, and needed a complete overhaul inside and out. A listed property, any repairs or improvements, no matter how minute, would also have to be approved by the local conservation officer.

“We spoke at length with the neighbours who had done a similar refurb the previous year and they gave us a great steer and we met with Sinéad O’Hara from the Dún Laoghaire Rathdown Conservation Office. She came on site and walked through all our plans, saying this is acceptable, this is not, and just like that, we had very clear guidelines and the green light to get cracking,” says Bradbury.

Builders BCG Homes were contracted and managed to get all the main jobs complete in under nine months and on budget, says Bradbury. Which is quite a feat considering the extent of work and the level of detail that went into restoring the 3,466sq ft house. The couple wanted a modern family home that was open and bright but they wanted to keep all of the period details. “So, we spent a lot of time researching appropriate styles and finishes online and checking with the Georgian Society and only used suppliers they approved,” says Bradbury.

Replacing the windows turned out to be quite a mission, as the conservation office states all original glass must be retained, unless damaged. “Most of them had been replaced over the years but we were able to save some original panes,” says Bradbury. Dublin Sash Window Restoration repaired and rebuilt all the frames, sashes, weights, shutters and boxing and they installed a special drawn glass, which is just as thick and air-tight as double glazing but looks like an original period window pane, so it got the nod from the conservation office.

The next major restoration job was the plasterwork as the house originally boasted lots of ornate ceiling cornices and roses, of which bits were still to be found hanging on in various rooms and hallways. Plasterwork.ie came to the rescue literally, and took moulds of what was originally there and made new lengths of cornice and ceiling roses or repaired anything that was salvageable.

The original pitch-pine floorboards were also returned to their former glory – “our carpenter lifted each one, took them all off site, stripped, sealed and painted them individually and re-laid them with thick layers of insulation between each floor and extra resin so there are no gaps or drafts,” says Bradbury.

The only structural change they made to the house was to knock open a wall between the kitchen and dining room, which thanks to beautifully executed joinery looks like part of the original design. Christoff, a Dublin company that specialises in bespoke cabinetry did all the internal carpentry, from building the kitchen to installing the wall panelling and designing the shelving units and wardrobes. “My inner engineer really appreciated their precise approach to things,” says Bradbury.

The couple got stuck in too. “We did most of the stripping, painting and decorating and we dug out the front and back gardens and put in new levels. Anna planted and landscaped the lot and has worked tirelessly to get both the front and back looking so well.” Meanwhile Bradbury built a vast pizza oven and grill area out on the patio. “I was getting quizzical looks when I told the neighbours, but we had a pizza oven in the back garden in Cambridge and we used it all the time. And with the weather this year, we’ve been out back, having pizza parties non-stop since May,” he says.

With the bulk of the work completed by spring last year, the family moved in and suddenly Bradbury had spare time on his hands again. So, he set up an art studio in the basement and began painting after work. “I find painting is the best way to focus and quieten the mind, it just decompresses me. I was initially painting slightly abstract landscapes to fill all the new walls in our house, mostly of inspiring scenes of Dublin Bay and Dún Laoghaire harbour and suddenly people were asking me to paint them something similar for their homes. I was finishing up my work contract in Blackrock Clinic and normally I would just go straight to another job but something told me to stop, give painting a shot for a year and see if I could actually make money doing what I love.”

Since last December, Bradbury’s taken on the role of stay-at-home dad, but when the kids are at school he’s set himself a target to paint one new work a day. “I’ve been selling my work via social media and to friends of friends and plan to host an exhibition later this year and show at Art Source in November. The business man in me is telling me I can make this work longer term if I can keep on top of the cash flow, while the artist inside me can’t believe my luck – I get to live in this beautiful house, hang out with my kids every day and do what I love. I only wish I’d had the balls to do it years ago.”

This site uses Akismet to reduce spam. Learn how your comment data is processed. 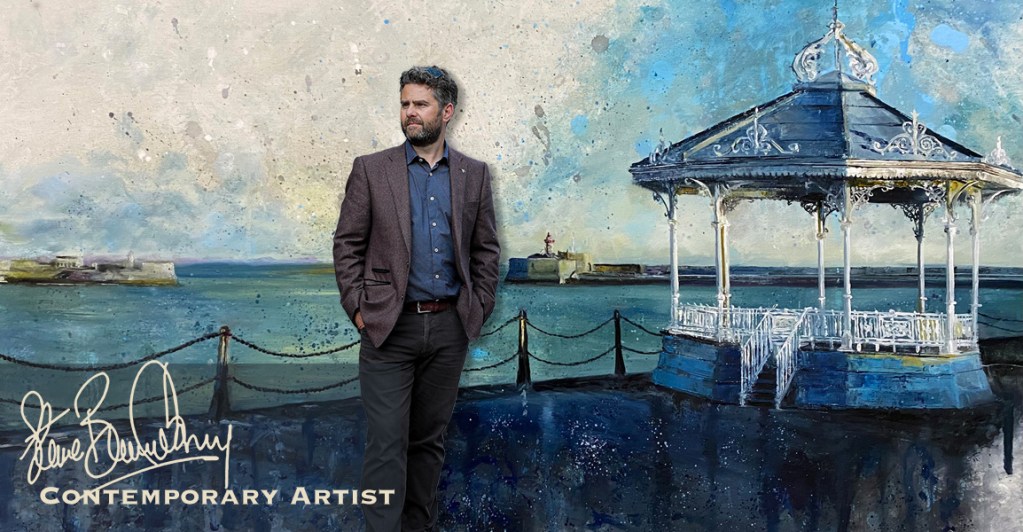 If you are unable to visit the studio in person, how about downloading a “Virtual Viewing”? This will allow you to see the artwork in much more detail.

Here is an example of what you can expect: